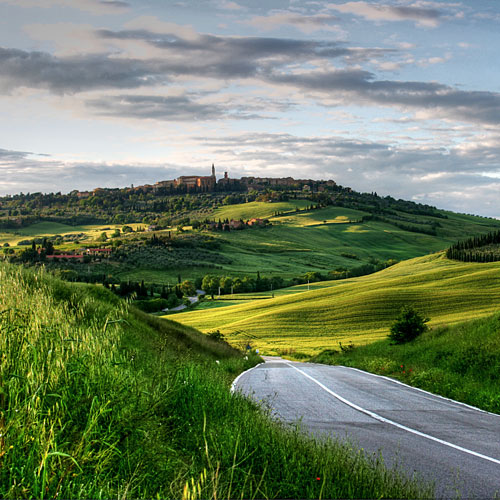 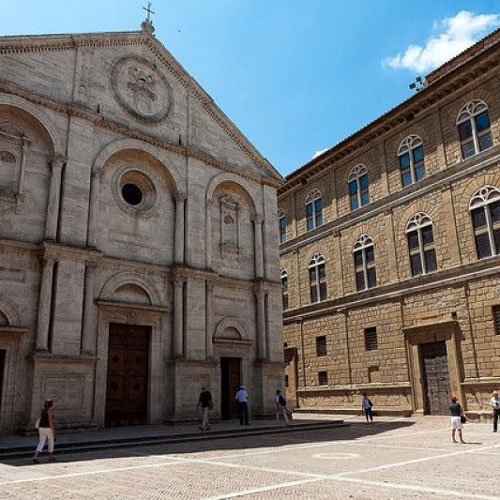 The small village of Pienza is strategically perched on top of a hill, dominating the Val d’Orcia. This charming village (which was originally called Corsignano) is known as the “ideal” city of the Renaissance, created by the will of Enea Silvio Piccolomini, who became Pope Pius II. The project was designed by the architect Bernardo – known as ‘Rossellino’ – under the leadership of Leon Battista Alberti. A harmonious complex was built, which includes the Cathedral, the papal residence or Palazzo Piccolomini, the Municipality building, and the lovely central square.

Piazza Pio II has a harmonious form giving great dignity and solemnity to all surrounding buildings. They were built of travertine stone, which gives the whole place a light honey color. On a side of the square, you can admire the Dogs’ Well.

The Duomo or Cathedral of the Assumption hosts remarkable paintings of the most renowned artists of the time, while the octagonal bell tower rises above the ancient crypt.Palazzo Piccolomini has a Lodge with a wonderful hanging garden from which you can admire a unique panorama over the Val d’Orcia – from Montalcino up to the volcanic Monte Amiata. Palazzo Piccolomini has incidentally been chosen by Franco Zeffirelli to shoot some scenes from the movie Romeo and Juliet. From the center of Pienza, you can reach Pieve di Corsignano. This three-nave Romanesque church dates back to the seventh century, yet its Romanesque style is chacteristic of the twelfth century. While the church is relatively empty, every aisle has an altar. Further to the right of the entrance, visitors will see the original baptismal font in which Pope Pius II and his nephew Pope Pius III were baptized. On the capital of the last left column you will see one of the few representations of the snake ruler survived in its original form to the present day. The snake ruler was a Roman deity, and was still known when the church was built. It does not necessarily represent evil, although San Gregorio the Great defines it as the “king of snakes.”